I mean, I get it.  I know that in order to be happy and comfortable, lots and lots of boys and men out there need to think, no, believe, that your idea of the most beautiful thing in the world is what they blast on the side of your face (and maybe a  little bit into your hair) and get all over your sheets.  I think there’s a bit of that to every dude, because hey, that’s part of human sexuality.  And sure, baby, if you’re happy, I’m happy.

But holy dong juice do I fucking hate John Mayer all of a sudden.  I’ve never even considered him before, and I couldn’t name a single John Mayer song if you asked me to, because I don’t listen to the radio, at all, ever, or read about music, or watch the music parts of Saturday Night Live, even.  But I do get bored at work, and clicking here and there brought me to what’s now been officially labeled a “controversial” interview with this motherfucker that was released by Playboy yesterday.  In it, the guy fucking brandishes his own cock like it’s the goddamn Power Sword and talks about women like they’re the occasional sock that gets stuck inside your pants in the dryer.

Fuck this asshole, if I had a He-Man sized cock, I’d slap him in the face with it until his pretty little puss had a big red cock welt on it.

PLAYBOY: At this point, what’s your ideal relationship?

MAYER: Here’s what I really want to do at 32: fuck a girl and then, as she’s sleeping in bed, make breakfast for her. So she’s like, “What? You gave me five vaginal orgasms last night, and you’re making me a spinach omelet? You are the shit!” So she says, “I love this guy.” I say, “I love this girl loving me.” And then we have a problem. Because that entails instant relationship. I’m already playing house. And when I lose interest she’s going to say, “Why would you do that if you didn’t want to stick with me?”

PLAYBOY: Why do you do it?

MAYER: Because I want to show her I’m not like every other guy. Because I hate other men. When I’m fucking you, I’m trying to fuck every man who’s ever fucked you, but in his ass, so you’ll say “No one’s ever done that to me in bed.”

I don’t think John Mayer realizes how fucking typical he is.  I think I’ve slept with two or three John Mayers and definitely dated one for a couple of months.  These are the boys who fuck you and immediately ask you how it was.  I mean, I’m put off by that question to begin with.  You may as well hand me a printed score card from the stack on the table next to your bed, and one of those little half-assed pencils they let you use at the library to fill it out with.  But the real issue with this question is that, when you’re fucking a John Mayer, it don’t matter what you say, baby.  All he’s going to hear is that it was the best time you’ve ever had, and when he tells someone else what you said, he’ll describe how you were actually so hot for his dick that your face exploded, and when he tells two more people, he’ll talk about how you had four heads that were all just begging him to fuck you.  Just the fact that this particular John Mayer is going ahead and reporting to Playboy and its readers that he feels he is capable of giving a girl “five vaginal orgasms” (expressly pointing out that they’re “vaginal,” you know, the real kind, I’m the kind of guy who knows about stuff like this so mehh) is so totally ICKY.

(Besides.  I’m of the opinion, now that I’ve thoroughly studied the Ray-J and Kim Kardashian sex tape, that celebrities and their bedmates have the most fake sex in the entire universe.  You got old skinny-dick catfish-mustache Ray-J up there jabbing away at the realm beneath this girl’s enormous ass mound, and she’s practically whining into a pillow about how hard she’s coming, oh baby, yeah, uh huh, I reeeeeeally aaaaaam.  And he’s just like Yeah.  You are.  Baby.  What a fucking snore fest.)

Then he goes on, after listing all the things he considers to be amazing about himself and his treatment of the women he dips his cock in, that the problem is an instant relationship.  He lures the little birdies in with a plate of hot sex and an organic omelet, then slams the fucking window on them.  Whoa, hey, I really love the way I feel about how you feel about me, but can we just be friends?  So that I can continue to get what I need from you?

“Look, I know I’m awesome, I know because I try to be.  I know I’m like, wayyyy better than other dudes.  What I need you to do is lay there and make me feel like that, okay?  So can you just love me and not expect anything from me?  God.  Sometimes it just hits me how wonderfully I treat you.  Come here.”

Oh, then he loses interest.  As some boys do when they feel like you might actually want them around.

Yeah, one of these douchewads used to make me breakfast.  For some reason, the John Mayers of the world fail to realize that all they’re doing is aligning with this Sensitive Man image, this bullshit fucking dating website cliche.  Which is why I always left before breakfast.  99% of the time the John Mayers of the world are just setting a mid-morning bear trap.  If you’re not stupid, you realize they’re just trying to get you to fall in so you’ll freak out when they dump you and they’ll soar on that high for weeks.  If you are stupid, you’ll hang around and play the game after you’ve figured it out. 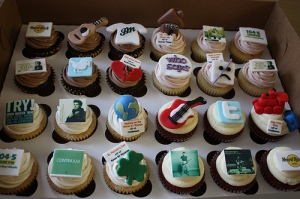 Yeah, these are John Mayer cupcakes. Whoever made them needs to be Taken Care Of.

I guess Playboy is the perfect place to go if you want to talk about the incredibly hot women you’ve fucked and your resistance to “settling down.”  But I’m seriously going to puke if I have to read one more article about how some dude isn’t ready to be “tied down.”  No fucking shit, of course you’re not, you’re full of more hot cum than the trash can by my gay anorexic Evangelical cousin’s bed.  But is it so fucking hard for people to understand each other?  I mean come on.  I had a John Mayer buying me presents and making me free range eggs with olive oil and chicken sandwiches with little star-shaped cucumber slices from his faggy little porch garden, but if I were to say, I don’t know, “Want to come to a party at my friend’s house this weekend?” he’d be all “OH MY GOD I NEED SOME SPACE.  I’M ONLY 29.  I DON’T WANT THIS RIGHT NOW.”

What do you bet that this would have just gone on and on forever?  OMG JOHN MAYER INFINITY.  “I’m 32!  I’m only 32!  I don’t want to settle down!  I’m 32!!!”  Kind of frustrating if you have enough intelligence to look at dating someone as the opposite of the end of the road.  And, fuck, the point is: I don’t want to settle down either!  Why are the John Mayers of the world so convinced that their magnetic cocks have the fucking Midas touch when it comes to making women want to nest?  I am so so so SO tired of dipshit boys acting like they’re running for their lives around the Battle Royale island of the sexes, and women are these sad, bloodthirsty beasts who they feel “really bad” about depriving of their food.

But I’m going to have to show you what happens next:

PLAYBOY: Do you do something different in bed than other guys?

MAYER: It’s all about geometry. I’m sort of a scientist; it’s about being obtuse with an angle. It’s sort of this weird up-and-over thing. You gotta think “up and over.”

Something I also hate:

Self-aware pieces of shit who can do nothing but talk and write about The Things They Know They Are.  “Like, I know I’m really great at art and stuff, and I knowww I’m going to be really famous someday, but…”

This son of a bitch might as well be saying that he’s just reeeeaal good at sex and knows it.  And I think anyone who knows they’re good at anything is actually not very good at all.  If you *know* it, well, you’re doomed to suckage, my friend.

Also, what the fuck is up with these dudes wanting points for getting women off?  It’s like when they put a tip jar out at Starbucks.  You’re supposed to take my order for this six dollar cup of shit, so fucking take my order.  I don’t want to hear another word about it.  Stick your tip jar up your ass.

Fuck you, John Mayer(s).  I am so sad that you’re smart enough to talk.

Every time I think about the Buckingham/Nicks breakup, I smirk to myself that Stevie’s song about it was soooo wayyy fucking better than Lindsey’s.  Go your own way, dickhole, I ain’t gonna stop ya.

Yeah!  Stick it to em, you hot bitch!